Altered Scaling is centered in the thoughts around one of the main attributes of form and space, the scale, and mainly in its conscious manipulation as a starting point or catalyst of design processes, mainly applied to architecture, but also to the fields of design, art or science.Scale manipulation is therefore proposed as an investigation about project thinking, using the manipulation of such strategically chosen attribute as a restriction frame. Scale is normally a binding attribute. It permanently establishes changing relationships. Its relativity mirrors the decision making process during creation processes. Scale is, essentially, an attribute based in the dimensional relativity that, as an analytic artifice, holds the unique capacity of arising other particular views of reality.Scale altering many times works as an effective resource to question the group of variables and attributes of the architecture project itself. The view is renewed from the restructuring of the observation conditions, intentionally causing a sensation of estrangement in the object of our design.To ostensibly modify the perception of an attribute such as scale, that allows to perceive a spatial-volumetric entity, equals to a complete alteration of the relation with the observer, its surroundings, and the role he used to play. The original consistency is then questioned and, in that context, the alteration of scale operates as a mechanism of creation, and operative hypothesis of the evolution of the design process.The number of testimonies on the manipulation of scale in the design processes proved to be overwhelming, and the net of relations, echoes and resonances that could be established among them is infinite. Altered Scaling is organized in two main chapters that privilege the simultaneous and diverse approximation of scalar manipulation, projected from the view from architecture’s allied and foreign disciplines.The first module identifies and develops some foundational concepts of the proposed theme. The second analyzes the role of the scale manipulation in the project thinking logic of some well-known authors.The communication of the research is organized in parallel layers yet correlated in multiple ways. The linear progression, from the very abstract reflection to the structuration of the documented material, is transversed by inflexions derived from specific logics of architectural thinking and by a discourse strongly supported in the visual acoustics of an important selection of images. Finally, it is worth mentioning that the ways in which the study is presented should also be understood as a mirror of the essential ludic qualities of the proposed research topic, and as an invitation to enjoy the design process. 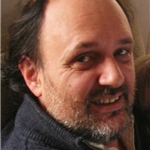