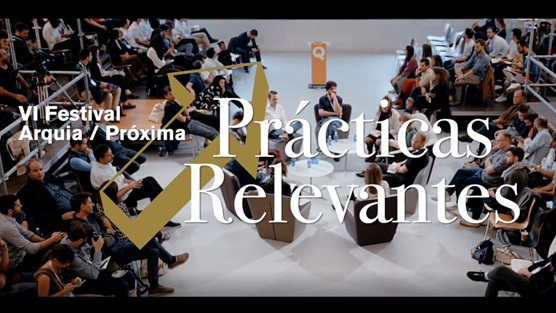 The motto for this biennial is RELEVANT PRACTICES and has been defined by the curator, Iñaki Carnicero, who invites us to reflect on the paradox produced by the international success of Spanish architecture, which is not consistent with the volume of architectural production in recent years, but nevertheless reflects work that is more relevant than ever.

The motto for this biennial RELEVANT PRACTICES defined by the curator Iñaki Carnicero, invites us to reflect on the paradox produced by the international success of Spanish architecture (2017 Pritzker Prize, Golden Lion at the Biennale di Venezia, leadership of Spanish architects in international studios as well as teachers at leading architecture schools) which is not consistent with the volume of architectural production in recent years, but nevertheless reflects work that is more relevant than ever.
On Wednesday 17, an architectural tour of the city of Madrid took place, with visits and meetings at Piscina Stella, Invernadero de Arganzuela, Matadero Madrid and Goethe Institut. Architects whose international work is linked to thought and criticism, such as Andreia García from Portugal, Gonzalo Herrero Delicado from London and Pola Mora from Chile, collaborated. You can view more information, photos and videos of the architects and the spaces HERE.
On Thursday 18 at La Casa del Lector in Matadero, the different round tables proposed by the curator Iñaki Carnicero took place: The redefinition of the idea of context, The magnitude of the small, Conflict as opportunity and Operational thinking, where the spatial format designed under the premises of the winning proposal of the specific contest favoured the participation of the attendees.
Jury members Pilar Díaz from Paisaje Transversal, Héctor Fernández Elorza, Iñigo García from VAUMM, María González from Sol89, Montserrat Nogués, patron and representative of the Arquia Foundation and Anna Puigjaner from MAIO; table moderators Ángel Martínez García-Posada, Jacobo García-Germán, José Juan Barba and Silvia Colmenares; and those selected for this edition: deAbajoGarcía, Adrià Escolano, Estudio rellam, Juan Miguel Martínez, Nua Arquitectures, Serrano + Baquero, Rosa Gallardo, Gonzalo Gutiérrez, Joel Padrosa, Ander Rodríguez, Carmen Torres, Arqbag, Arquimaña, Arquitectura Expandida, Cornago & Sánchez, Eeestudio + Zuloark, After Belonging Agency, José Aragüez, Arquitectura a Contrapelo, Bartlebooth, Nomad Garden, Vilaplana & Vilaplana participated. In the afternoon, Eduardo Souto de Moura held a conference in which he described his latest projects and Joao Carrilho da Graça presented the topic for arquia/scholarships' next call.

The event concluded with the awarding of scholarships and awards: