Fritz Lang has been one of the filmmakers whose filmography has the most links with architecture. Perhaps this circumstance is due to the fact that he had a father who was an architect and began studying architecture, the fact is that in his works one can recognize references to expressionism, futurism and a great fascination with the modern metropolis with its physical and human landscape. The city is sometimes portrayed in his films by capturing its mysterious and disturbing character, through the shots from the top of the empty streets of M, the vampire of Düsseldorf (M – Eine Stadt sucht einen Mörder, 1931) or the New York of the nightclubs and train carriages of Scarlet Street, 1945, other times through its inhabitants: street vendors, preachers, children who look in the windows, beggars, hustlers and prostitutes.

Despite the fact that the great science fiction writer H.G.Wells defined Metropolis as "the stupidest film ever made", almost a century later this work by Fritz Lang continues to exert an extraordinary influence on our imagination. It doesn't matter that our cities haven't become a giant vision of 1920's Manhattan, or that technology has ended up being integrated forever into our daily lives. The vision of the Metropolis skyscrapers, with their hanging bridges and air traffic, continues to visually represent our idea of the city of the future, a mixture of the urban visions of Sant'Elia and the nightmares of H.G.Wells.

With the publication of the new book in the collection La Cimbra El compás y la cámara. Studies on Fritz Lang, (Arquia Foundation, April 2020), Manuel García Roig proposes a reading of the architectural character of the German author's films, inviting us to discover his 'architect's approach' in films such as his masterpiece , The Vampire of Düsseldorf (M – Eine Stadt sucht einen Mörder, 1931) or in those he filmed once he had emigrated to the USA, such as Scarlet Street, 1945, and The Big Heat, 1953. As Roig points out, although the director's German period is undoubtedly the most celebrated for its connections with the discipline of architecture, a closer look at the director's later filmography can help us discover how this relationship is much richer and more complex: "the essential question by which a filmmaker manifests himself as an architect (that is, he plans from a point of view similar to how he does when he projects), is the staging" (1).

In Le Mépris, 1963) Jean-Luc Godard paid tribute to him by making him play the role of himself, a film director who is shooting the Odyssey, which is partly shot in the famous Villa Malaparte in Capri. Le Mépris has several keys to reading, from the process of distancing the Piccoli-Bardot couple, to the reflection on the demands of the film industry and the ethics of the film director. These latter considerations are treated more explicitly by Lang and Godard in an interview conducted by André S. Labarthe: Le dinosaure et le bébé. Dialogue en huit parties entre Fritz Lang et Jean-Luc Godard (1967). The film is rich in details about its shooting techniques - the improvisation of the baby—Godard—against the perfectionist preparation of the dinosaur—Lang—, the functioning of censorship in countries like France and the USA, the social function of cinema and its being a 'mass art', the relationship of filmmakers with the takings of their films and the need for them to have a critical approach. In a scene from Le Mépris, shortly after the businessman represented by Jack Palance summarized his philosophy by saying: 'when I hear the word 'culture' I take out my checkbook', Fritz Lang's character recalls a phrase from Bertold Brecht, alluding to Hollywood: 'Every morning to earn my bread, I go to the market where they sell lies and, full of hope, I queue up with the sellers'. And I think there's no better way to describe the work of a filmmaker. 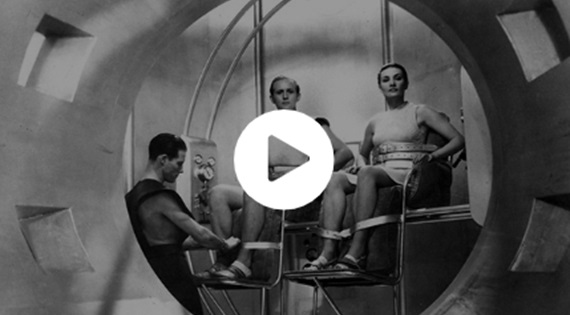 When cinema overtakes architecture: visionary projects on the screens

It does not make sense to suggest that the screens are the place where you can see what is going to happen in the future. Science fiction cinema, as science fiction writings, uses the future to explain and analyse the present in which it was conceived (...) Jorge Gorostiza 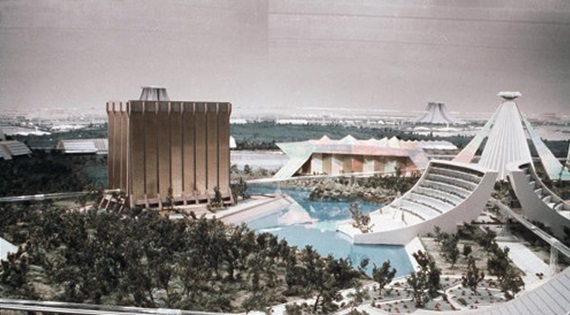 Cinema has raised buildings, cities and entire universes to imagine the future. Fictional and real architecture are intermingled.

Some film sets get inspiration from classical schools, others are built directly on the screen

Daniele Porretta is an architect with a PhD in the Theory and History of Architecture from the ETSAB-UPC. He has been a regular collaborator to various institutions, such as the CCCB and the fundació Mies van der Rohe, and is a professor at ELISAVA Barcelona